Here is a history provided by Eric Stern - CLICK HERE

The Emirate of Fujairah is the only emirate situated along the Gulf of Oman, away from Hurmouz Strait. Its coasts extend along the Gulf of Oman over a distance of 90 kilometers. This location gives the emirate a very special stratagic importance. The area of the emirate is 1165 square kilometers, equivalent to 1.5% of the country's total area, excluding islands. The population was estimated to be 66,000 in 1992. The town of Fujairah, the capital of the emirate, comprises the Ruler's office, governmental departments, establishments and commercial companies. Other important locations are the Fujairah Port, and the Fujairah International Airport, location of the VRC-50 detachment.

The physical features of the emirate are basically formed of rough mountains, containing in between them and the Gulf of Oman, and the Eastern Coastal Plains, which are very fertile lands. It possesses spectacular tourism capabilities reflected on the coasts which extend over a border coastal line, the high series of mountains connected in various locations to the sea coast, natural valleys and Falaj, renowned for their beautiful picturesque nature, and mineral water. 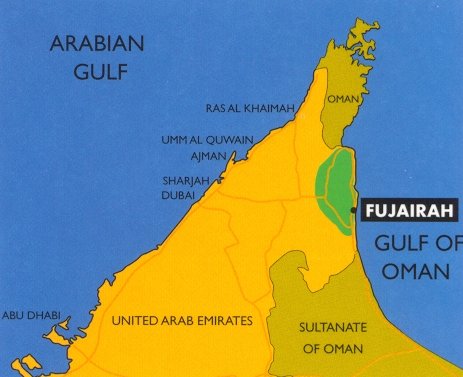